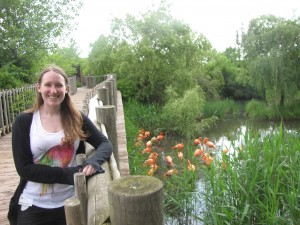 Concordia University and Granby Zoo began a research collaboration in 2014 entitled “The Concordia-Zoo de Granby Initiative in Ecology, Conservation and Welfare of Captive Wildlife”. The aim of this collaboration is to increase knowledge on the role of zoos in conservation, and improve animal welfare practices.

Breeding flamingos in captivity can be challenging as flamingos have unreliable reproductive cycles dependent on environmental cues such as food availability,  rainfall, and temperature. While zoos can control these factors to encourage breeding, it has not always been successful. Flamingos perform group ritual displays prior to the breeding season in order to synchronize reproduction. Current zoo exhibits tend to be open-topped enclosures which require the flamingos to be wing-clipped to restrict flight. Wing-clipping has been shown to decrease fertility in flamingos, and wing-clipped males often have difficulty maintaining their balance during copulations. Egg breakage is the most common cause of low reproductive success in captive flamingos. Nest site aggression is often the main cause of egg breakage and more research is needed to determine the causes of nest aggression and methods to decrease the aggression. Research on wild populations has shown that flamingos are active and often forage at night. Nocturnal activity has not been studied in captivity thus far and could alter the feeding protocols if it is found that they are more active at night. These various social and environmental factors will be studied in an attempt to better understand the breeding cycle of captive Caribbean flamingos and provide Granby Zoo with the information to improve the welfare of the flamingos, and create a more stable and successful breeding program. 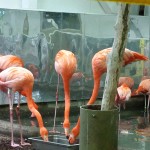 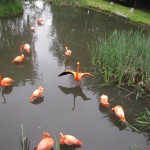 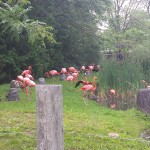 In order to further the understanding of the Caribbean flamingo breeding cycle in captivity, we will: