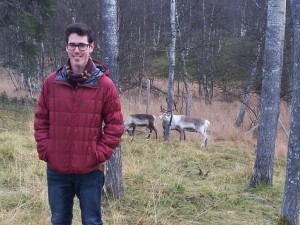 The relationship between operational sex ratio (OSR) and the intensity of competition in reindeer ((Rangifer tarandus L.): the effect of male age

Sexual selection is Darwin’s second greatest insight, which explains the evolution of traits (ex. weaponry and ornamentation) that increase an individual’s reproductive fitness through competition and female mate choice. There are a variety of mechanisms for the competition to gain access to mates such as, scrambles, endurance rivalry, contests and sperm competition. Of these various types of competition, contest competition is likely to be the most common form for mammalian species. Contest competition can include fights, chases or threat displays but these behaviours vary across species. While the intensity of sexual selection greatly depends on the level of competition for mates, the degree of competition depends on both the parental investment of each sex and the operational sex ratio. The operational sex ratio (OSR) is one of the two main methods for quantifying the strength of sexual selection, where it describes the ratio of sexually mature males to sexually receptive females in a breeding group at a given time. When the OSR is more biased to one sex, those individuals will experience higher intrasexual competition to gain access to the limiting sex. This increase in intrasexual competition has been seen across various taxa, however, within the OSR literature there is virtually no work on large mammalian species in semi-natural environments.

My fieldwork will take place in Kaamanen, Finland at the Kutuharju Reindeer Research Station from mid-September to mid-October in 2016 and 2017. We will be utilizing 1.5 and 2.5-year old male reindeer (Rangifer tarandus tarandus) to investigate if age is an important factor on the behaviours exhibited by reindeer in the presence of either a balanced OSR (3♂:3♀) or a female biased OSR (3♂:6♀) under semi-natural conditions. The main predictions are: (a) as OSR increases, intrasexual competition between males will increase, whereas female-female competition will decrease, (b) courtship is expected to decrease with increasing OSR because of increased male-male competition (c) alternative mating tactics will be more present in older males due to their rutting experience.