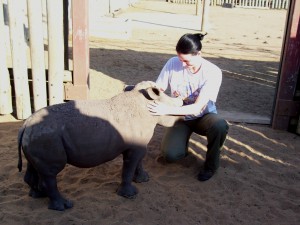 The black rhino population has suffered drastic declines over the years and has been categorized as a Critically Endangered Species on the IUCN Red list of Endangered Species since 1996. The lack of suitable habitat and the constant pressure from poachers confined the black rhino to generally smaller and more fragmented populations. Populations of black rhinos are influenced by both physical and biological factors. In a fenced reserve, natural fluctuations in ecosystems (climate change, habitat modifications, wildlife population fluctuations) combine with the effect of management strategies (alien plant control, burning strategy) to influence these populations. The study of those effects on a black rhino population can provide crucial information for the sound management of this priority species and further our understanding of the relationship between ecosystem ecology and population dynamics.

The project takes place in Mkhuze Game Reserve in the Kwa-Zulu Natal Province of South Africa. The field work consists in gathering 30 years of monitoring data on the black rhino population of the reserve as well as long-term information on the climate, the habitat, the burnings, the alien plant control work and on other wildlife populations.