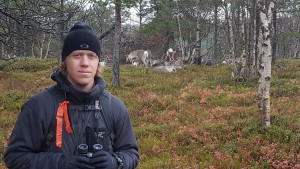 Polygynous mating systems are often characterized by intense intrasexual by males, while females are typically assumed to act a limiting resource. Consequently, research on sexual selection has been biased towards males as the more active, conspicuously behaving sex. However, a complete understanding of sexual selection theory requires consideration of both female and male mating tactics and their interaction.

Reindeer (Rangifer tarandus) are a useful study species for assessing female contributions in polygynous mating systems. Critically, reindeer calving season (and by extension the breeding season/rut) is phenologically linked to green-up in at northern latitudes, and females are expected to exhibit a high degree of choosiness regarding potential mates. Indeed, previous studies have found a preference for body size among females, with older, larger males enjoying increased reproductive success compared to younger, smaller individuals. This preference for body size likely reflects the high risk of mortality of calves, which may be reduced by offspring inheriting good body condition from their father. Paradoxically, previous work on reindeer in Finland has found above-expected paternity rates among young males. This coupled with anecdotal observations of promiscuous mating by females in the field prompts questions about methods of selection by females. Indeed, given the importance of body condition in calves, promiscuous behaviour seems an ill-fitted strategy unless there is a mechanism for post-copulatory selection.

The objective of this study is to assess the degree to which promiscuity occurs in female reindeer and whether this is an active strategy employed by females during the rut. To that end, I will investigate how often females mate with multiple males during the rut. I will also investigate whether the mating order influences the paternity of offspring to assess whether further inquiry into possible mechanism of post-copulatory selection should be considered.

The study will be conducted at the Kutuharju Reindeer Research Station in Kaamanen, Finland (69˚N, 27˚E) using a semi-domestic herd of approximately 100 individuals. Each animal is fitted with a VHF radio collar with a unique number-colour combination that allows them to be tracked and identified in the field. Animals will be tracked via radio telemetry and will be observed using a 15-minute focal observation technique. Using this technique, the behaviours of a selected individual is recorded at 15 second intervals. This herd has been the subject of an ongoing long-term study since 1996. Resultingly, we know which males have mated with which females, and we know the paternity of all calves for multiple years.

I am aware of no studies examining the extent and possible explanations for promiscuity in female reindeer. Existing literature on mating behaviour in reindeer is biased towards males as the more active, conspicuously behaving sex; however, a complete understanding on the reproductive ecology of this species requires consideration of both female and male tactics and their interaction. To that end, I will use a semi-domestic herd to:

1) Examine the degree of mismatch between observed copulations and paternity across years to determine whether females regularly mate with multiple males.

2) Examine whether post-copulatory sexual selection occurs by assessing the influence of mating order and male dominance rank on calf paternity.

3) Examine whether the degree of promiscuity is related to female dominance rank, male age structure, or sex ratio.