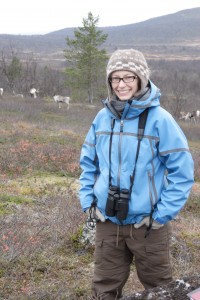 Patterns of resource-allocation are essential to understanding life-history traits of an animal. Nutritional efforts should be directed towards phenotypic traits which maximize an animal’s lifelong reproductive success as with secondary sexual traits (SSTs) such as antlers. Resources are rarely unlimited, thus tradeoffs between body mass and antlers are expected in sexually dimorphic ungulates, as both are important life history traits reflective of dominance, good foraging skills, fighting success and increased reproductive success. Body mass and antler size are not mutually exclusive however, as increased body mass is correlated with increased antler size. Thus, comparisons of absolute measurements are not appropriate. The use of allometry -the relative growth of a trait- is one way to investigate these tradeoffs and with which comparisons to other populations is possible. Secondary sexual traits are assumed to be under the influence of positive allometry but age- and sex- patterns have not been established in reindeer (Rangifer tarandus). Within the Cervidae family, reindeer/caribou are the only female deer to develop antlers, providing a system in which resource allocations towards SSTs can be compared between sexes as well as ages. Some individuals can have an apparent absence of costs of antler growth. This may be accounted for by heterogeneity of individual quality and resource allocations. I will establish sex- and age-specific growth patterns of antlers using absolute measurements as well as allometric equations. The variance of individual quality will be established and I will also investigate the use and shape of antlers in females in order to further discuss their evolutionary significance.

We will be studying a reindeer population from the Kutuharju Field Reindeer Research Station in Kaamanen, Finland (69°N, 27°E). This herd is composed of semi-domestic reindeer that are free ranging for most of the year excluding the calving and rutting periods. These animals are managed and harvested by the Finnish Reindeer Herders Association, therefore, we are able to continuously gather information on the ecology and behaviour of the individual reindeer. See pictures on this web page

The objectives of this study are to examine the resource allcoations towards SSTs (antlers) in life-history strategies in reindeer (Rangifer tarandus);