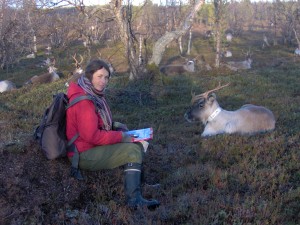 The project is a part of the ongoing joint Nordic program “Reproductive ecology of reindeer” where the field and experimental work is conducted at the Kaamanen Experimental Reindeer Station, in Northern Finland. The experimental herd consists of around 100 collar-marked individuals (~80 females and ~20 males) living permanently within a fenced area (about 40 km2). The herd has been manipulated by changing the male age and structure during the rut since 1996.  Before rut all males have been radio-collared. During the rut (from the 25th September to the end of October) they have been tracked daily and the composition and IDs of all animals within each mating group recorded. Their activity and rutting behavior have been recorded using focal sampling. The same recording methods will be used in 2008 and 2009. The data set is unique since all individuals are known and followed throughout their life, with detailed data including birth mass, date of birth, reproductive history, offspring survival and performance and body mass in winter, spring and autumn, as well as before and after the rut

I will be working on the above mentionned population at the Kutuharju Field Reindeer Research Station in Kaamanen, Finland (69°N, 27°E). The pedegree of these animals is known, allowing me to do individual based investigations.